All credit goes to MyAnimeList.net for providing the plot summary
Okay, well I did add a few things in just so the second season would make more sense.

Season 1
On August 10th of the year 2010 the Holy Empire of Britannia began a campaign of conquest, its sights set on Japan. Operations were completed in one month thanks to Britannia's deployment of new mobile humanoid armor vehicles dubbed Knightmare Frames. Japan's rights and identity were stripped away, the once proud nation now referred to as Area 11. Its citizens, Elevens, are forced to scratch out a living while the Britannian aristocracy lives comfortably within their settlements. Pockets of resistance appear throughout Area 11, working towards independence for Japan.

Lelouch, an exiled Imperial Prince of Britannia posing as a student, finds himself in the heart of the ongoing conflict for the island nation. Through a chance meeting with a mysterious girl named C.C., Lelouch gains his Geass, the power of the king. Now endowed with absolute dominance over any person, Lelouch may finally realize his goal of bringing down Britannia from within!


Season 2
A year has passed since "The Black Rebellion" and the remaining Black Knights (Lelouch's 'army') have vanished into the shadows, their leader and figurehead, Zero (ie. Lelouch), executed by the Britannian Empire. Area 11 is once more squirming under the Emperor's oppressive heel as the Britannian armies concentrate their attacks on the European front. But for the Britannians living in Area 11, life is back to normal. On one such normal day, a Britannian student (Lelouch), skipping his classes in the Ashford Academy, sneaks out to gamble on his chess play. But unknown to this young man, several forces are eying him from the shadows, for soon, he will experience a shocking encounter with his own obscured past, and the masked rebel mastermind Zero will return. 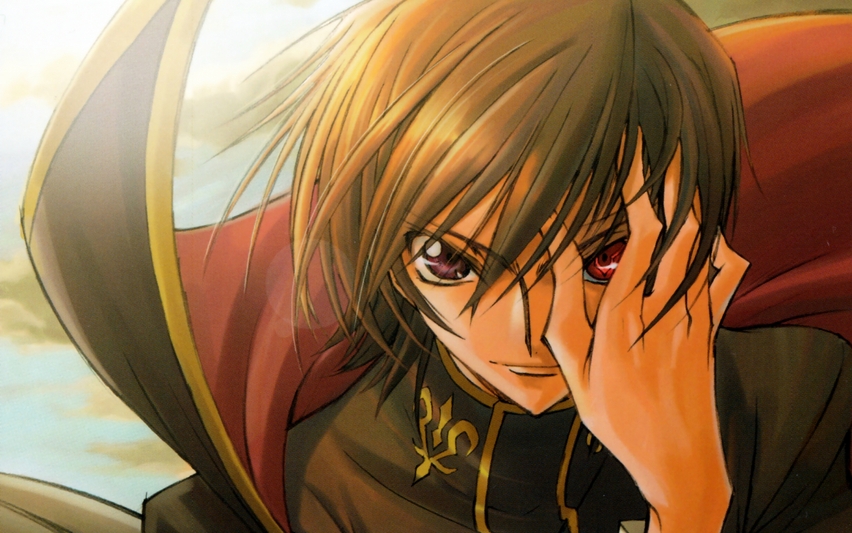 Our main anti-hero, Lelouch vi Britannia
On so many levels, Code Geass is exactly what I would define as an AMAZING anime.

In terms of the story, it seems easy enough to follow: the main protagonist (Lelouch) receives a strange power that suddenly allows him to control other people. Being an "exiled prince", he is filled with vengeance and strong thoughts of revenge on the country that 'betrayed' him. So basically, it's a conquest type anime, involving mechs, a sort of automaton, as the modern day 'army machine'. You could think of them as better replacements for our modern day tanks.

However, there is way more to it than what one would have originally thought.

Code Geass is not a story about how a boy used newfound powers to conquer the world and build it anew. It is the process of how such miracles occur with an ultimate price. It is not idyllic in any sense- there is no damsel-in-distress. What really makes the story seem so effective and appealing is because of the anime's moral exploration of humanity itself and what it truly means to live.

Suppose there is an evil that justice cannot bring down. What would you do? Would you taint your hands with evil to destroy evil? Or would you carry out your own justice and succumb to that evil? [Lelouch vi Britannia, Code Geass]

In a world like today, the harsh reality is that there will always be 'evil' in humanity. Corruption. Violence. Greed. All these characteristics were not like an existing bacteria, waiting to infect humans. No, the even harsher reality is that we humans have always had these traits- it was all just a matter of to what degree your conscience allowed it to overrule rational thought and compassion. We are capable of destroying ourselves, just like how we are equally capable of rebuilding our race from the ashes. This notion that every person has a 'dark' side of themselves is how the story continually sates the viewer's hungry sub-conscience. Personally, I found the story extremely relatable and thought provoking. It was as if the anime was made to explore the tragedy that is the human race through means of Lelouch and his conquest to rebuild the world anew, freeing humanity from its chains of hatred and fear.

Without moral conflicts, the story of a boy set on world domination would've fallen quite short of remarkable. But without the boy's dreams of world domination, the moral conflicts would just be like an abstract painting of paint splashes- appealing at first glance, but too confusing for viewers to understand the point it's trying to make.

Ultimately, it is how the producers have managed to flawlessly orchestrate both aspects to the point where they create a harmonious melody of distinctive yet complementary voices that really makes this anime so thought provoking and memorable, if not slightly inspirational. 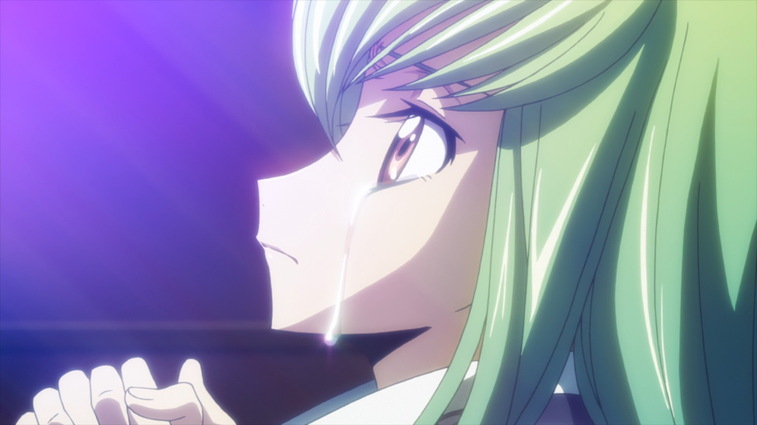 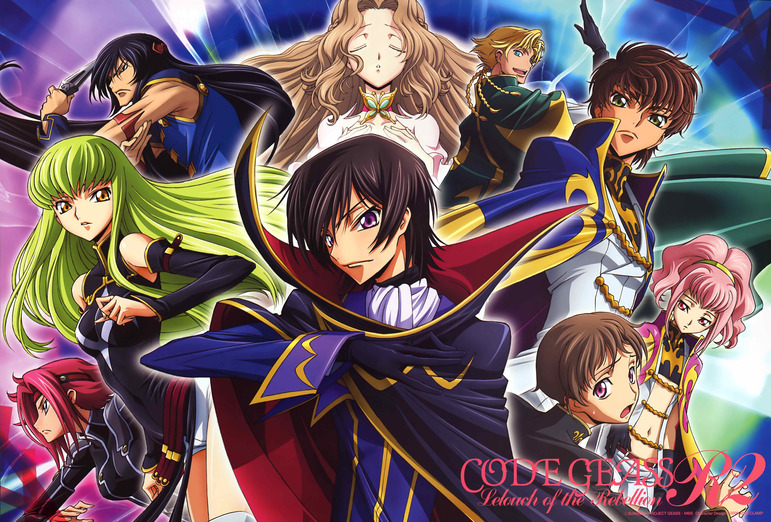 From left to right, top to bottom: Kallen, Xingke, C.C., Nunally, Lelouch, Gino, Suzaku, Rolo, Anya
Fundamentally, each character was well thought out. Most of the characters, particularly the main characters, successfully avoided diving into the deep end of being stereotypical- in fact, they were extremely far from it. Especially when it came to names: Like I mean, who would've named their main protagonist "Lelouch"? What I really enjoyed in terms of the characters was how each and every character had a mixture of strengths and weaknesses, neither of which were always clearly identified as such for the viewer. For example, you could take Lelouch's intelligence- it is obviously a very strong strength of his, increasing his success in formulating and executing a plan. On the flip side, you could then argue that his intelligence results into a situation where he often over-thinks, and becomes too conceited for his own good.

There was no 'hero' of the story, and neither was there a clear villain of the story. Making the main character Lelouch and anti-hero protagonist enhanced the moral conflicts that are so prevalent and vital to the story.

Ultimately, every character was fighting for a common, united goal: freedom and peace. But if freedom can only be obtained by oppression of others, and peace by violence, isn't that completely undermining the nature of the goal itself?

The way Code Geass explores this to different degrees using different characters is extremely well done. It gets right down into the roots of what makes a good character development, where it is not just a simple change in surface mentality, but an alteration of the character's fundamental beliefs.

Although some aspects of the female characters *ahem* were probably created for the purpose of 'fan-service', I really liked the art style that they used. But I guess, being developed from CLAMP, you would expect no less.

What I found somewhat amusing was how sometimes, the characters expressions became really warped and exaggerated (in the not-so-cute-exaggerated type). It was as if the producers wanted to make sure that we 'got the message that character A is currently feeling this'. And don't worry, pft, we did. 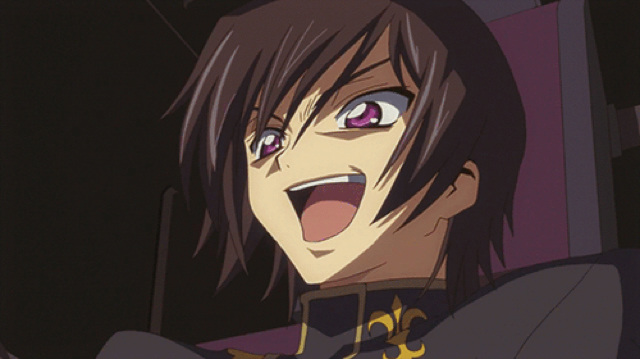 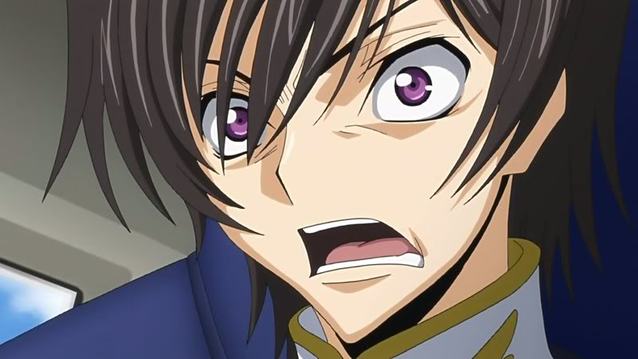 You said what?!
Despite that, I really liked what the animators did to show Lelouch's Geass power. Not only does it clearly show when Lelouch is using it on a particular individual/group, but it also shows exactly where the Geass power has manifested in Lelouch. This becomes an important feature early on in the second season, where Lelouch cannot (at will) specify when to use the Geass power. Instead, it becomes a permanent feature, meaning that whatever he says to others, regardless of whether or not he had meant to use his Geass, will be affected by his Geass and therefore followed. 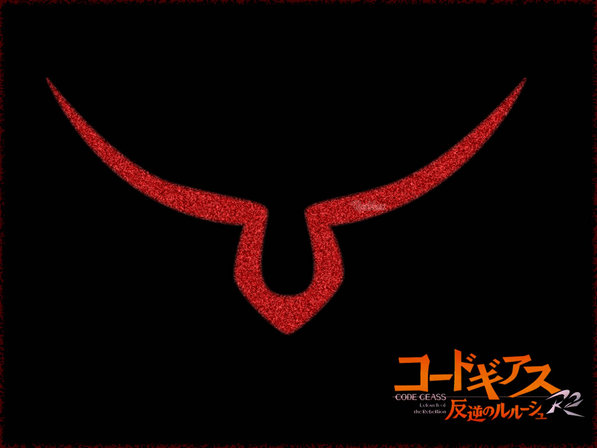 The Geass symbol- just so you know 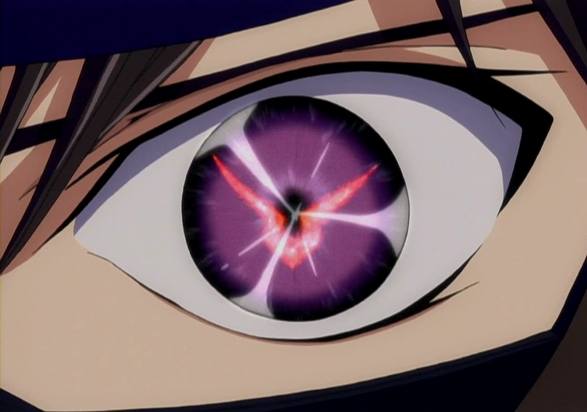 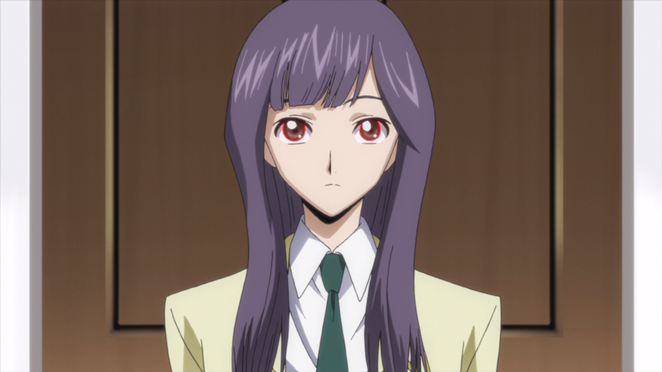 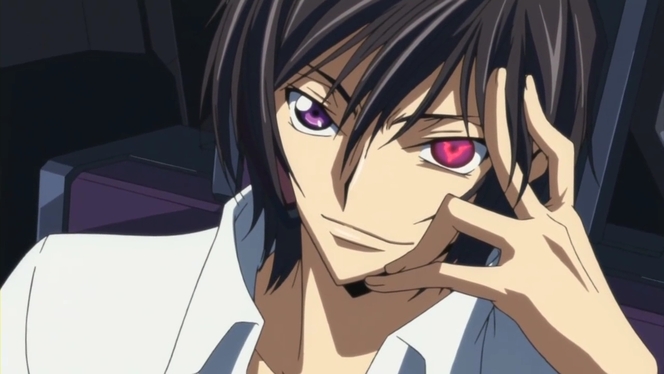 Lelouch's eye when his Geass power becomes permanent
But in overall, I'd have to say that I really enjoyed the art. And hey, I'm sorry, but even if his name does raise some eyebrows and laughs, Lelouch is ATTRACTIVE. (>///<)

Far more attractive than other characters in the anime (though that's my opinion), which are still considered quite attractive or pretty. 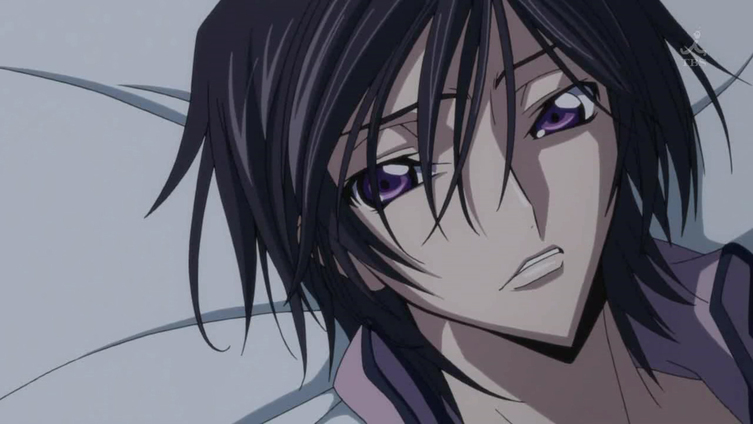 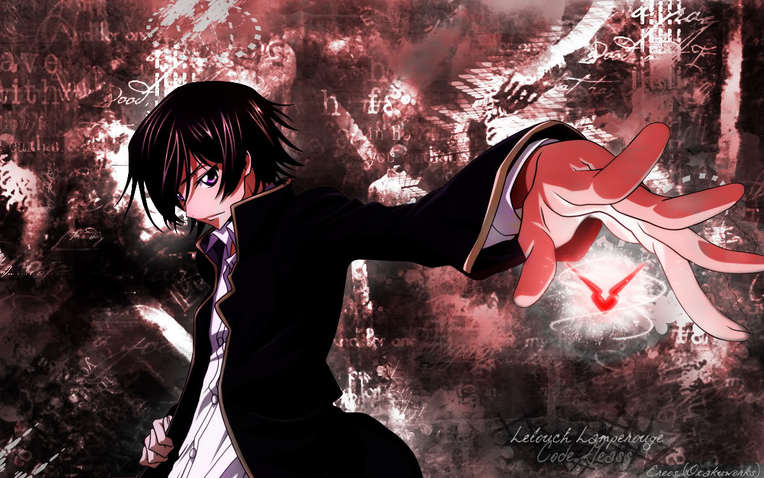 No problems here- but for these reviews, you can expect that there will be no problems here, as I wouldn't continue watching the anime if the animation was that bad.

The music and soundtrack used was amazing, adding greatly to the tone of the anime scenes. It was the type of soundtrack that would always remind you of the particular anime scene it featured in, so emotional in its composition that I could actually cry just by hearing a track or two...That was how memorable and moving it was. 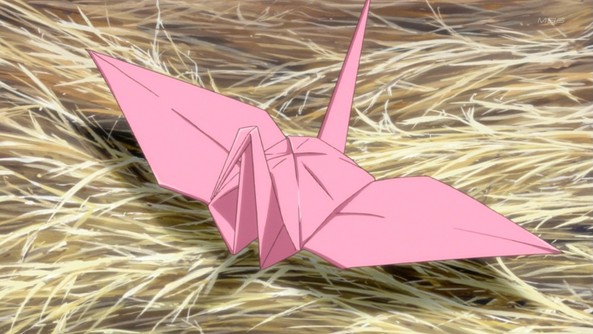 In a story such as this, there is never a clear 'good' or 'bad'. Characters redeem themselves but at the same time set on the path of damnation, leaving you rooting for both sides of the conflict. The painstaking truth that only one side can emerge victorious leads to an eventual overflow of emotion for either side when judgement is finally decided upon. There will be no happy or sad ending for this anime- there is only the bittersweet ending.
Final Verdict: 10/10
To be honest, I cried a lot at the ending, but not because of the *ahem, spoiler information* final scene. I guess what was really heart-wrenching for me was the entire nature of Lelouch's plan, and what he truly had set out to do in the beginning. 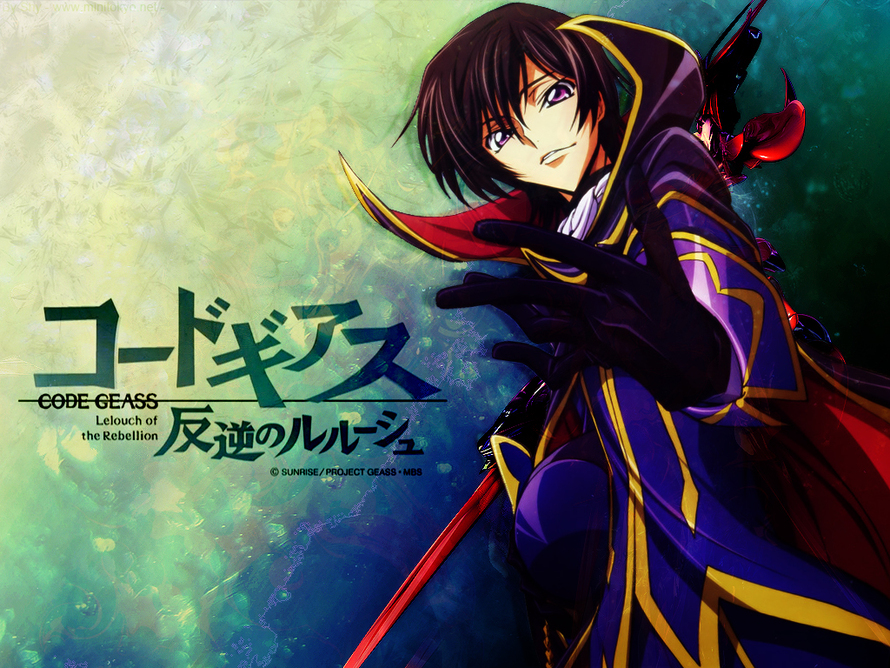